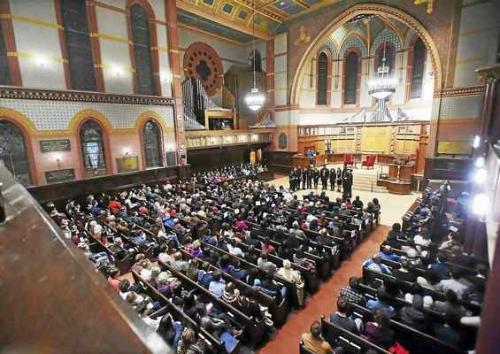 While only in her twenties, Nash led the successful peaceful sit-ins to desegregate lunch counters starting in 1960 and co-founded the Student Nonviolent Coordinating Committee the same year.

“I was a lucky woman. I was in the right place at the right time. I received an excellent education in nonviolence,” she said.

Refusing to post bail, Nash faced stints in jail for civil disobediece and coordinated the Freedom Riders to integrate interstate buses, refusing to end the movement after one of the initial rides was firebombed and the riders violently attacked in Birmingham, Alabama, in 1961.

Nash said that was a “seminal moment for the Civil Rights Movement.”

She told the packed chapel that if the Freedom Riders stopped right after such violence, “the message would be sent that it is possible to stop a nonviolent campaign or project by inflicting massive violence.”

She said there would have been no movements for voting rights or desegrating public facilities or anything else if that had happened.

She used the lecture to mention other women in the movement who were courageous and played important roles, but with who the public might not be as familiar, including Ella Baker, Fannie Lou Hamer, Septima Clark, Gloria Richards, Martha Newman and Mary Hamilton.

Nash said history books portray King as the leader of the Civil Rights Movement, but she had a different observation and didn’t mean to take anything away from his achievements.

Nash told the audience that “nonviolence is not just the absence of violence. … It is not passive. It is active.”

She said it is based on brotherly love -—love of human kind and it works. Nash said she has been able to use these principles for a lifetime.

Nash said nonviolent action is an alternative and better way to conduct social struggle. “This is our opportunity to move a step higher in our evolving into an improved species.”

She advised the students to investigate the issues they are drawn to, discuss them thoroughly, don’t be blind followers and look for innovative answers.

She said when they determined that restaurant owners feared they would lose their white customers if they served black customers at their counters, Nash said they recruited white women from some liberal churches to have lunch at those counters for three weeks.

When a black customer was then seated, as long as the white women remained, there could not be a boycott, Nash said.

She said that worked very well except at the end of three weeks, “the ladies complained bitterly about all the weight that they had put on. … So you see there were many kinds of sacrifices.”

Nash advised the students that demonstrations and boycotts are also tools to be used, but they won’t work alone.

“Very often the powers that be know you don’t like what you are doing, but they do it anyway,” Nash said. She said with a nonviolent campaign, you set an objective and move step by step.

She said voting is also important, but it is not enough.

“We must understand elected officials have not and will not do what is necessary to protect the interests of this country and of American citizens,” she said.

Nash said “the only way this country will make it through this frightening period and survive with citizens having a reasonable” amount of freedom is to take the future into their own hands.

She said the goal back in the 1960s was to benefit the current generation.

“Even though we had not yet met you, we loved you and we were trying to bring about the best society that we could for you to be born into and come of age in. Future generations are going to look to you to do the same,” she told them.